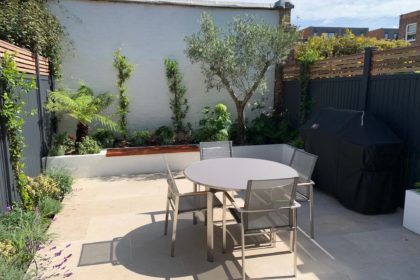 This small garden was in serious need of redesign. The owners felt that the external space to their property needed to reflect their new interior design which was calm and understated. They were looking for a contemporary garden design.

Caroline Garland, of Caroline Garland Garden Design , one of the leading garden designers of South London, was invited to come up with some simple and unfussy ideas. This was to be a contemporary garden with no frills.

Despite its small size the garden has a sunny and shady side to it – so the planting need to have some of both types of plants – see the list below.

Jurassic cream coloured limestone was used for the stone. The client did not want this replicated in coping for the raised rendered beds which were left plain.

The fencing was tongue and groove but it was painted with a wonderful dark petrol blue/slate colour to give it a smart effect along the contemporary garden design brief.

The back wall was repointed and painted white which gives a strong clean light to the garden. The raised beds were rendered white walling.

As usual in small gardens good lighting is essential http://www.bemco.co.uk and uplighters and downlighter were installed in the raised beds.

For the shadier areas: