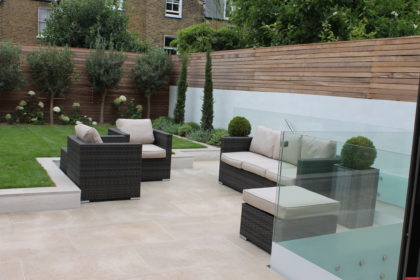 Caroline Garland, one of the leading garden designers in South London , designed this garden. It is situated between Wandsworth and Clapham Commons . It had served its owners well for 16 years but it was time for a change when the house was renovated late last year to an entirely new, contemporary and fabulous standard… they needed a garden to reflect that look.

This Clapham garden was in a very bad state and so a complete overhaul was necessary, including height changes, new steps, new walling, new fencing, new lawn and new planting.

Using our garden design services we levelled the garden which meant removing large amounts of earth from the garden. Lots of labour and man hours required to carry all the spoil through to the waiting skips! To offset the height change we introduced a small step up bordered by limestone edging – the edging was wide (225mm) which created an appealing effect. This border then carried on around the lawn creating flowerbeds.

In this Clapham garden we built new limestone steps down to the basement and rebuilt the walling. We also put in entirely new fencing and horizontal tailor-made cedar trellising. We used limestone paving and real grass! How often are we asked to put in fake grass, it was lovely to see real grass in this garden.

The planting is a mix of classic English (hydrangeas and lavenders) with a touch of Provencale (pencil cedars and standard olive trees). Once the shrubs have grown up the garden will be a delightful complement to the wonderful new interior.

Lighting was clearly a must and we installed uplighters around the garden. These look good on late summer evenings as well as during the winter months when they produce a warm glow rather than a black empty space.

Could this lovely Clapham garden be an example of how sensible it is to employ garden designers!