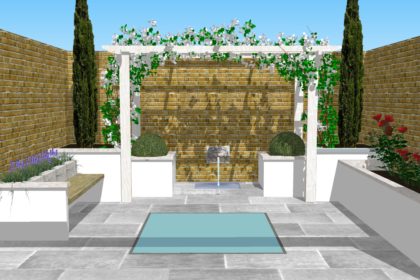 Garden designers need to have great foresight to see how a small patch can be turned into an interesting garden design. This garden did not exist, it was a back yard and only became a space for a garden when a newly excavated cellar was built for the kitchen and the roof was put back with the garden designed to sit on top!

Caroline Garland, one of the leading garden designers in South London was invited to design a space for the client to make maximum use of a small area but which could be an integrated part of the internal design so that when the bifold doors were pulled back the garden became an extension of the sitting room. There was a light well but otherwise nothing in place so there was everything to design.

The client was looking for a contemporary, low maintenance garden design. Top quality products were used to give a very luxuriant look to the space.

The garden walling was London old stock and the paving was the finest York stone. The raised beds were rendered white with York stone coping giving a beautiful finish and York stone was also used as the splashback to the fountain. The fountain was the only part of the garden that had a relatively dated look, but this was on purpose because it added a substantial and quirky aspect to the design.

The pergola was designed with plain sturdy uprights which were painted hard wood, giving a modern look and the integrated bench was made from Iroko hard wood.

The planting was inevitably evergreen topiary with some smaller plants to soften the look. Pencil cupressus trees, buxus balls and the ubiquitous lavender played an essential part!

Lighting was an important component for this garden. Uplighter, downlighter and ribbon lights were installed.