Lighting up the forest in February

It was a pretty bleak day on Sunday, the first of February, overcast and rather cold and drizzly.  But if you have Jack Russell dogs there is no alternative but to go out and give them a good walk… and my mother always says “never look at rain, get into it” – you feel much better that way.  So we set off to  Hyde Park (we thought that Richmond Park might be incredibly soggy underfoot and rather depressing on such a drab day…) There was a lot going on in Hyde Park.  For a start they were heavily re-turfing acres (literally) of ground after the Winter Wonderland fair that was there over the Christmas jolly.  There were lots of people about like us walking their dogs and there were quite a few evergreen plants doing their best to show off… Garrya elliptica with it’s long drooping silvery catkins, Daphne producing pretty pink flowers, Ophiophogon giving us a good go with its lovely black leaves and Liriopes withstanding foul weather with its complementary green leaves and Viburnums etc etc.  However it was the ferns that lit up the woodland areas and I was reminded what useful plants they are.  Do not underestimate them for their use in shady areas in a garden which otherwise has little hope of producing plants – here are 3 reliable ones.

A fern is a member of a group of roughly 12,000 species vascular plants that reproduce via spores and have neither seeds nor flowers. They differ from mosses by being vascular (i.e. having water-conducting vessels). They have stems and leaves, like other vascular plants. Most ferns have what are called fiddleheads that expand into fronds, which are each delicately divided. 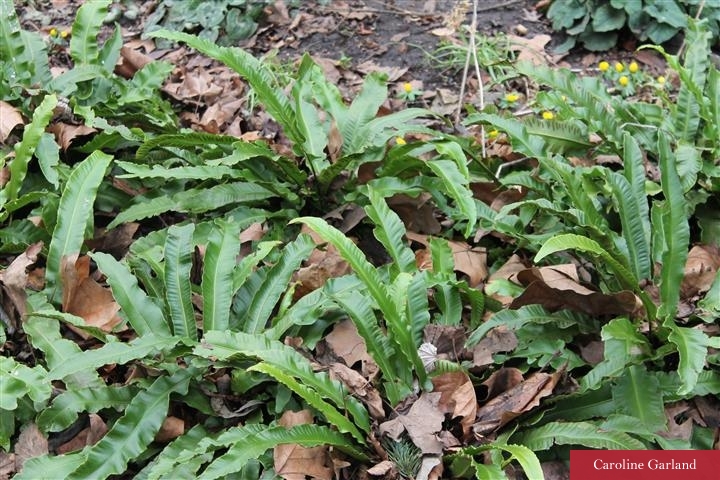