I have just read a wonderful article by Tim Richardson in the May issue of the Society of Gardenr Designers’ Journal where he talks about ‘conspicuous design’  being a ‘matter of taste’.  In a nutshell he is arguing for the natural and against the ‘over-design’ which takes place more and more in our English gardens.  He says that the over-design issue is not THAT bad in British garden design (unlike say the French) but how much do we really want to see the evidence of the designer’s ‘signature’ on everything. He asks ‘do we want to be designing gardens that look designed anyway?’  Surely as GARDEN designers we should be creating something effortless and undesigned.  Read the article if you possibly can get hold of a copy… This whole way of thinking was backed up by a girlfriend of mine  only yesterday when I posted before and after photographs of a current design of mine on Facebook and she posted back ‘I like the before AND after’ where I think she was graciously telling me that she preferred the ‘before’!  This I am sure is because, in order to satisfy a young professional couple’s requirements (who don’t really ‘garden’) it is usual to have to wreck an original garden to get a more contemporary ‘easy to maintain’ effect. Therefore I find myself  taking out old woody shrubs and replacing them with structure and  hard landscaping – ie ‘over-designing’.  The effect IS attractive and quite modern but in my heart of hearts is it honestly better, more beautiful, softer, more romantic etc – ie is it design, is it gardening, is it truly what a garden should be?  I dunno.

Here is a fine example of the above.  The garden had clearly been loved at some point.  My clients were adding a back extension with bi-fold doors to the house and the kitchen was to become part of the garden – a further ‘room’, hence they wanted the kitchen tiles to continue into 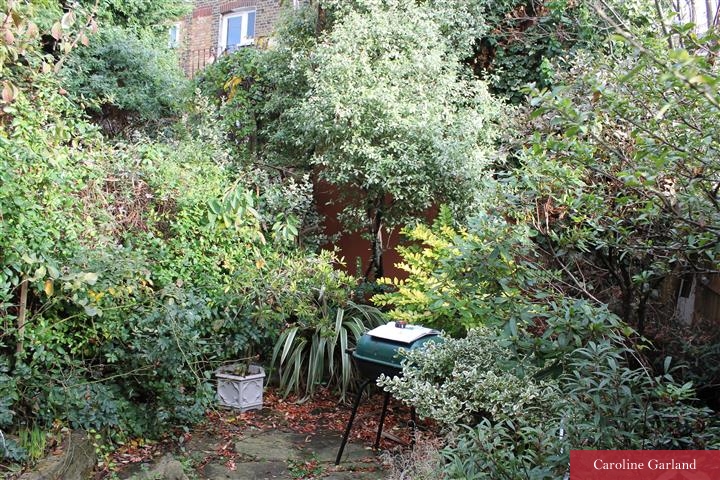 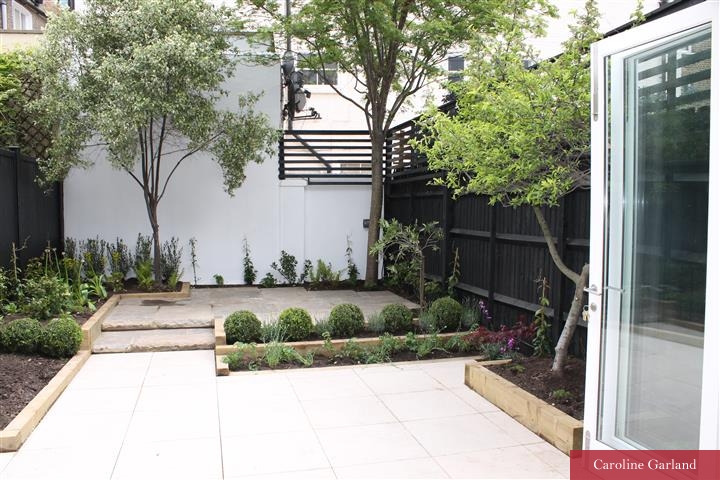 the garden.  But there was some fabulous old York stone which was top quality and as thick as it can be covering large areas of the garden of which some had to be incorporated into the design – it would have been criminal no to.  I managed to offset the disparity between the kitchen tiles and the York stone by putting in two small ‘terraces’ bordered by railway sleepers so that the juxtaposition between the two was marginally broken down and we have ended up with a sweet terrace area at the back in the fabulous York stone.  Everything else in the garden was removed apart from two trees.  The garden is formally planted in as much as there is a line of buxus balls but I have added the softness I always crave by putting astrantias, sanguisorbas and dianthus in amongst.  Yes it IS a bit twee but the end result will be lovely I hope.  I have also put in lots of climbing roses and at the back of the garden there is a shady area where there are ferns, anenomes, euphorbias and foxgloves (I still call a foxglove a foxglove, it’s a childhood thing).  In the front on the left hand side there is a raised bed left empty for vegetables and herbs.  I think this garden is going to look very good in June and July and I’ll post further photos then. 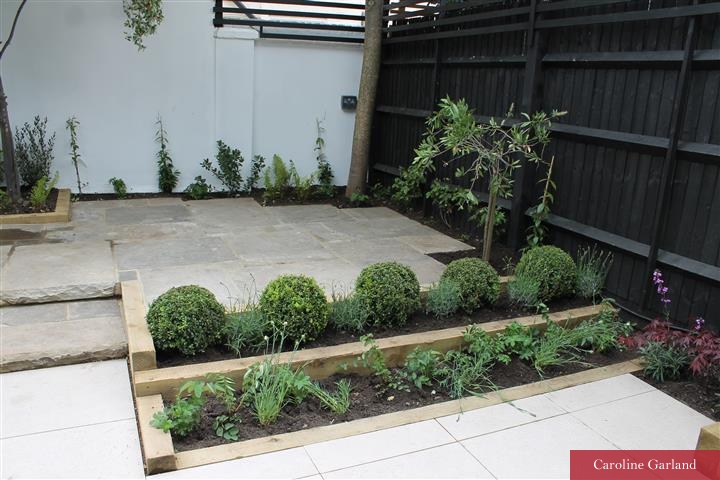