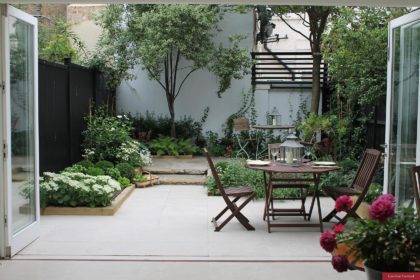 This small London garden, the garden of a mews house off Wandsworth Bridge Road, Fulham, was in a terrible mess. When Caroline originally saw the house it was undergoing a complete overhaul and an entire back extension was being added with bifold doors onto the garden. It is now a delightful garden having been designed by one of the best known garden designers in South London!

The clients, both young professional people, wanted a garden that was both easy to maintain and easy to use as an outdoor entertaining area. With a small London garden it is necessary to get the balance right and in this space Caroline created two seating areas – one by the house for a larger table and then another one for a small cafe table on the higher level at the back of the garden.

The client wanted to be able to move seamlessly from the kitchen through to the garden using the same treatment, a light limestone, inside and out for the paved area.

However Caroline noticed (hidden by lots of unruly shrubs and builders’ rubble) that there was some fabulous thick York stone already in the garden which she felt had to be incorporated in the new garden design. She handled this by making two levels separating the two surfaces by timber raised beds. You can see the fabulous thick limestone on the steps to the higher level.

What was an old fashioned overgrown garden turned into a wonderfully light and airy extension or extra ‘room’ to the house.

The client also wanted a vegetable bed which was easily incorporated into this plan using the same timber surrounds.

Part of the fencing was renewed and part of it was the original fencing. It was made to look similar by painting all the fencing with a good outdoor wood treatment paint.

The lighting is simple but effective – using a combination of up-lighting for the pretty Pittisporum on the back wall and downlights for the seating area by the house. The planting is low maintenance interspersed with some pretty summer perennials for soft colour and interest.