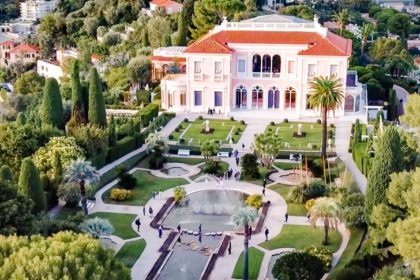 http://www.villa-ephrussi.com/en  An exceptional villa and garden – quite extraordinary

Béatrice was the daughter of the baron, Alphonse de Rothschild, a banker and renowned art collector. At the age of 19, she married Maurice Ephrussi, a Parisian banker of Russian origin, 15 years her senior, and a friend of her parents. The marriage quickly turned sour for Béatrice. She contracted a serious illness from Maurice, which prevented her from having children. Maurice was a gambler and in 1904, his debts totalled over 12 million gold francs, the equivalent of 30 million euros today. Her father died in 1905 and the Baroness inherited his immense fortune.Worried about the future, the Rothschild family decided to bring Maurice to court in order to file for a divorce. They won the case and in June 1904, after 21 years of marriage, the divorce of Béatrice de Rothschild and Maurice Ephrussi was officially pronounced. Béatrice then turned her attention to one of her great passions: collecting art. Béatrice had inherited her keen eye and her taste for beautiful objects from her family, renowned for the remarkable collections built up by several of her relatives over the years. Her motto was ‘Ars Patriae Decus’: ‘Art is the honour of the fatherland’. She acquired many items—a Tiepolo ceiling, eighteenth-century furniture, a games table that had once belonged to Marie Antoinette, and a rug commissioned by Louis XIV—to furnish the future villa. Béatrice’s father died in 1905 and the Baroness inherited his immense fortune year, that same year she decided to construct her dream home in Cap Ferrat. When she first discovered this plot of land, she was immediately seduced by the beauty of the surroundings. However at the time, the site was rather inaccessible—it was little more than a barren rocky area traversed by a mule track. When she learned of the sale of the terrain and that the Belgian King, Léopold II, was also interested in it, she purchased it without hesitation.

The gardens are magical – like a mini Versailles in places due to their formality.. there are 9 gardens or green rooms which are decorated with columns, waterfalls, ornamental ponds, flowerbeds, and rare species of trees:  the Spanish, Florentine, Sone, Japanese, Exotic, Rose, Provencal, French and Sevres gardens.